PCR: negative. According to the consulate the first and only Spaniard who had applied for a visa to travel to the Republic of Liberia since the beginning of the COVID pandemic. The adventure was promising.

As it could not be otherwise, we arrived late and I had to spend the night in Brussels. As I like to travel light, I boarded a train and walked 1 km through the city to get to my hotel with three surfboards, suitcase full of materials, tools and just enough clothes, the backpack with the laptop, masks and some other stuff. The next day, the same walk to get to the airport.

I finally arrived at my destination: 8 st Don Bosco Technical High School, located in Monrovia, capital of the Republic of Liberia, which has a primary and secondary school, a water pump, the priests' residence, and a technical school for vocational training.

It seemed that COVID had not arrived there, life went on as usual. Full markets, streets crowded with people and not a single mask. As the locals said, "COVID was a disease of the elite because only high government officials and important people from abroad had it".

Well, let's get back to the important stuff. A couple of years ago there was a whole year without power grid supply, and during my stay I dare say it worked only 50% of the time. The electrical distribution in Monrovia is very chaotic, there are a lot of people without access to it and the outages are long and frequent. 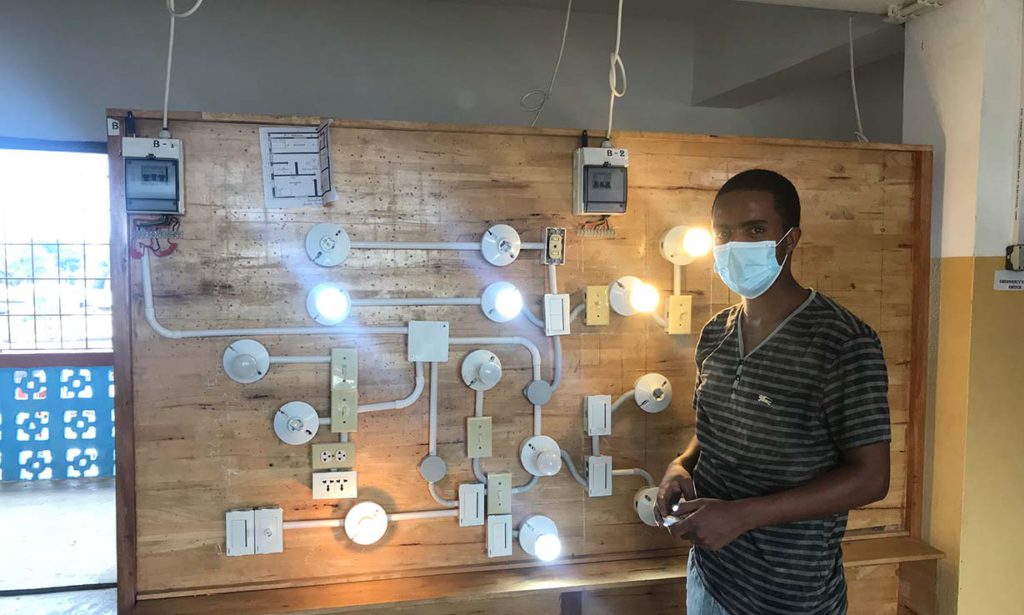 On the first day I asked all the students, sixteen of them, to attend the first day of work of one of the three installations that we sent in a container along with training material. I did not know what I had gotten myself into, so we decided to divide the trainees into four groups and everything turned out to be much more operational and contributed greatly to the improvement of the teaching and learning process for the students.

I was accompanied by Professor Abdul from Ethiopia, a great friend after having lived and worked together every day. In addition to his knowledge and interest in solar energy, we also shared good surfing moments.

It took us two weeks to finish the first solar installation, which was the biggest one with 105 panels, 3 inverters/chargers, and 3 lithium batteries. The electrical wiring in this installation was more complicated due to the long wiring we had to do. I could only stay for a month, so I knew that the next two installations had to be installed faster. 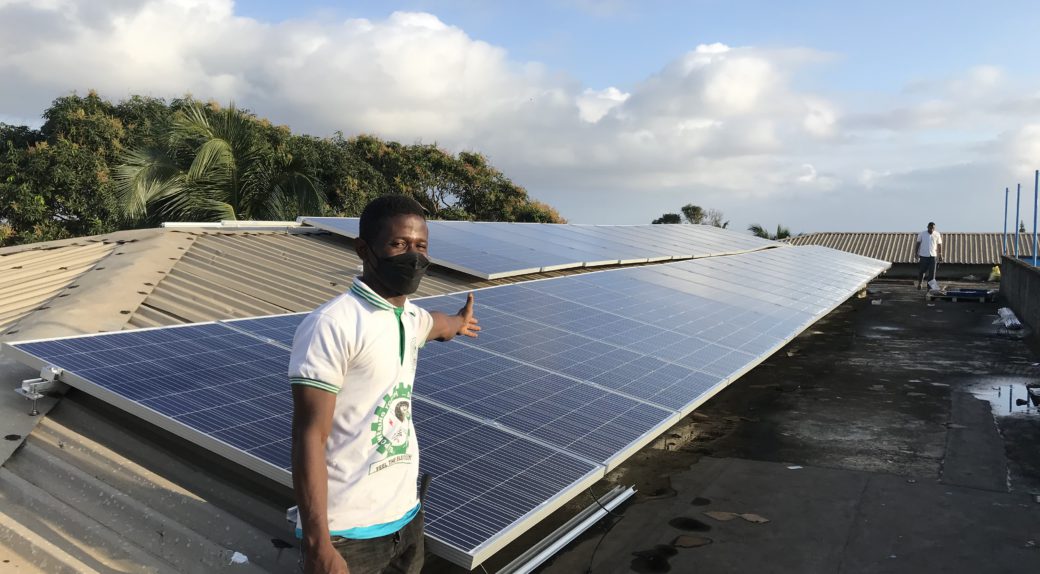 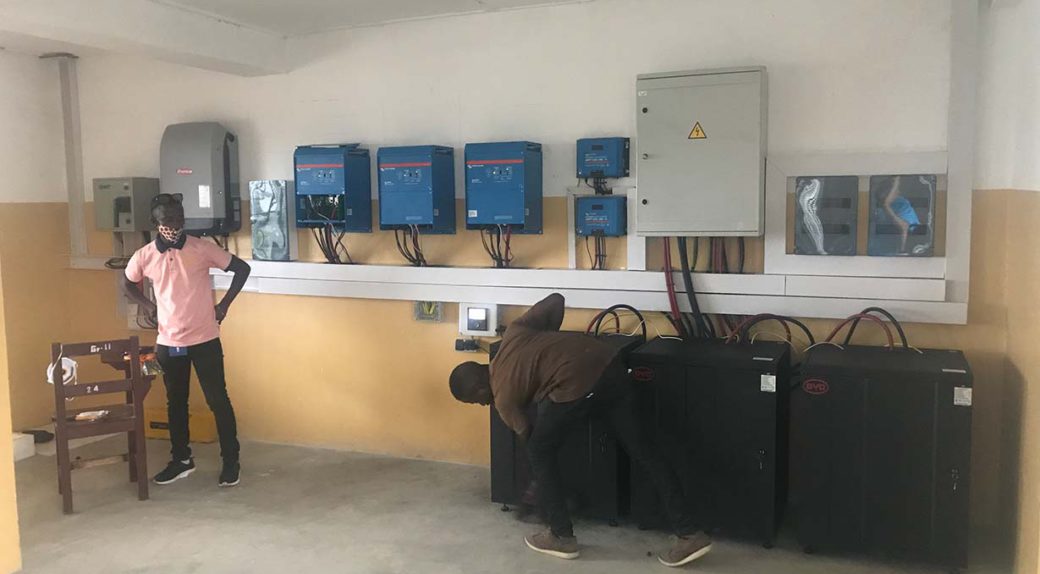 Our second adventure began, the installation of the "Mary Help of Christians Catholic School" in the Matadi neighborhood of the capital Monrovia. The center has a primary and secondary school, a water pump, a parish, a priests' residence and an activity center for the youth of the area. This neighborhood was much more humble than the previous one, here everything was built on the marshes and there were many houses and roads flooded.

As the students already had some experience from the previous installation and this one was a bit smaller, we managed to finish it in 7 days. 75 panels, 24 lead batteries of 80 kg each, and a large inverter. The installation was faster, but the conditions of this roof were more complicated due to the height and the lack of thickness in the metal sheet of the roof. We had to take extreme precautions and only the necessary personnel went up to the roof; the weather was very variable with rain, sun and wind, so the conditions were not on our side. 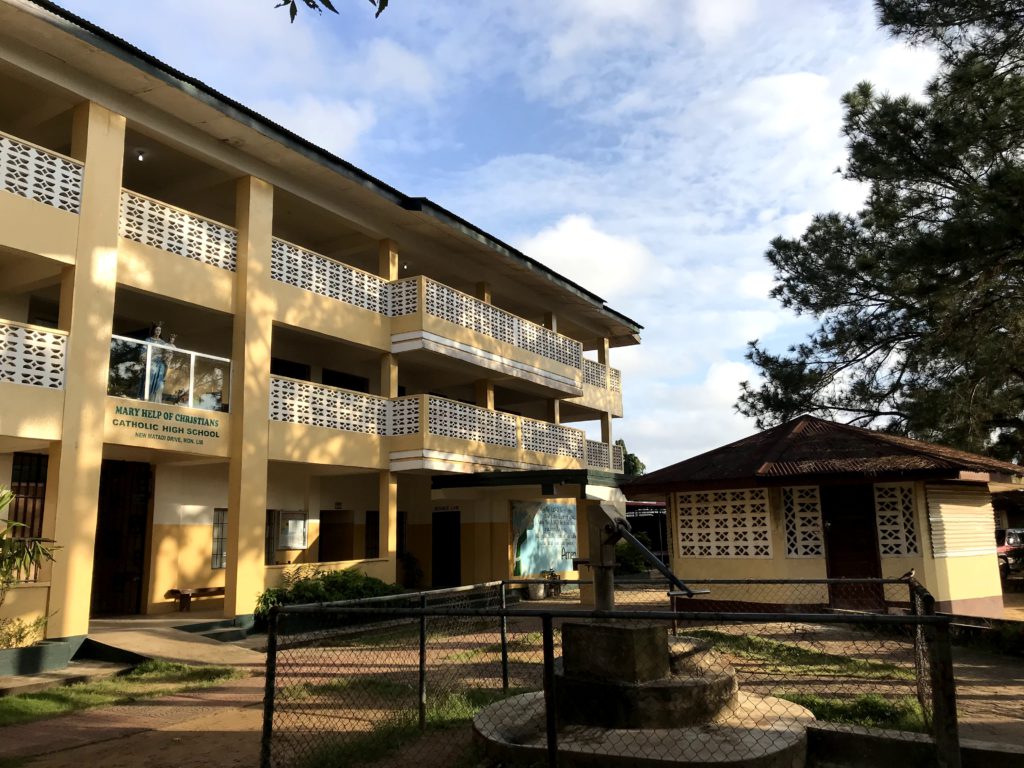 At this point, Abdul (the Ethiopian teacher) and I had been working non-stop for 21 days, although with the occasional surf session to unwind. Our star pupil, Mapolo, was a student with high technical knowledge and even more willing to learn. Mapolo came every day, even if it was not his group's turn, he insisted that he only came to observe. The truth is that it was very good for us because he always gave us a hand when we needed it. So, as the third installation was a bit more complex due to the location and time of the year, we signed Mapolo to come with Professor Abdul and Father Ricardo. We started two and there were already four of us! 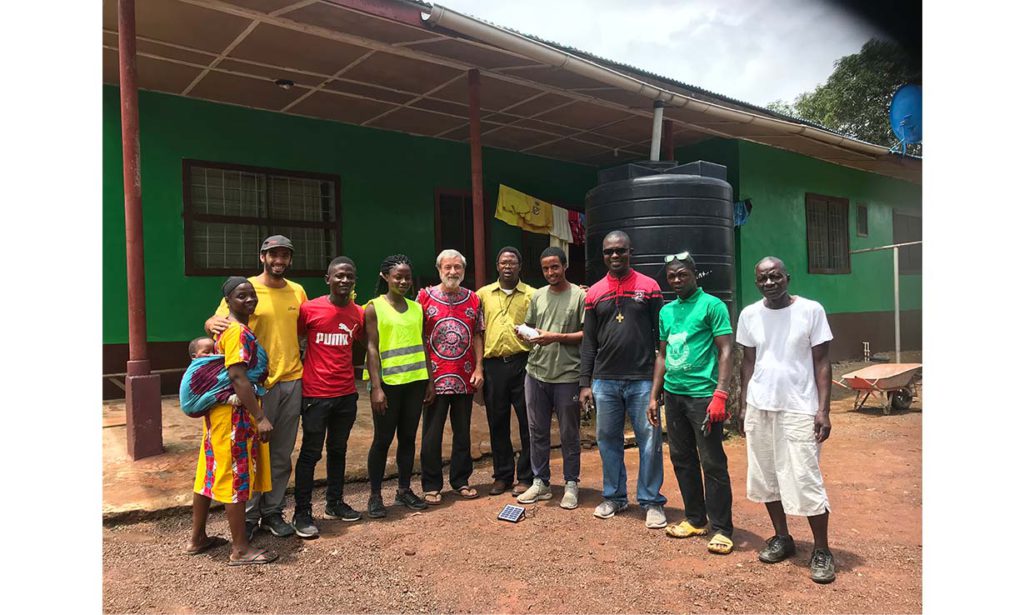 Let me introduce you to the fourth member of the team, Father Ricardo, a 71 year old Italian Salesian priest. After a few days collaborating with us in the first installation, he was hospitalized because of Malaria, where he stayed for several days. After a week's rest, he packed his bags and accompanied us on the trip to Tapeta.

The third and last installation was at a center in Tapeta, about 350 km inland from Monrovia. We did the first 220 km by car on a well-paved road, enjoying the jungle, the caoutchouc tree fields and the quiet life of the farmers. Once we arrived in Ganta, the road ended and we changed to motorcycles.

When we saw the motorcycles arrive and the amount of mud they were carrying, we knew we had a good adventure ahead of us. Mapolo took off his shoes so as not to get them dirty and decided to continue the rest of the trip barefoot. It was only about 130 km, but it took us almost six hours, this was a real rally. 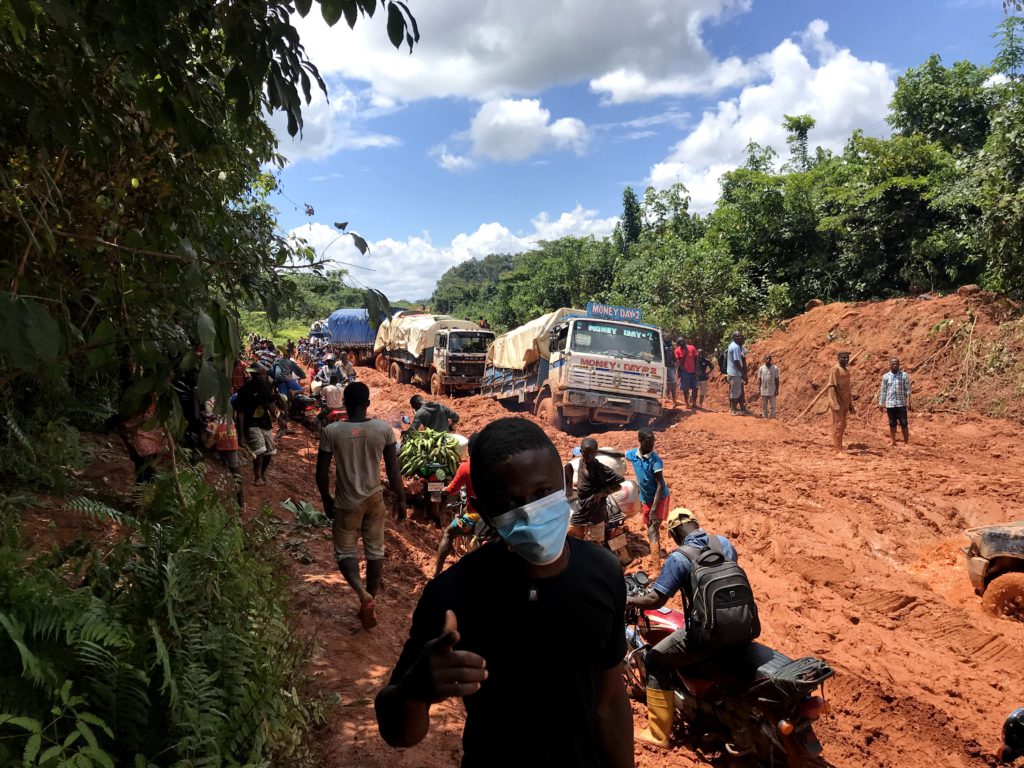 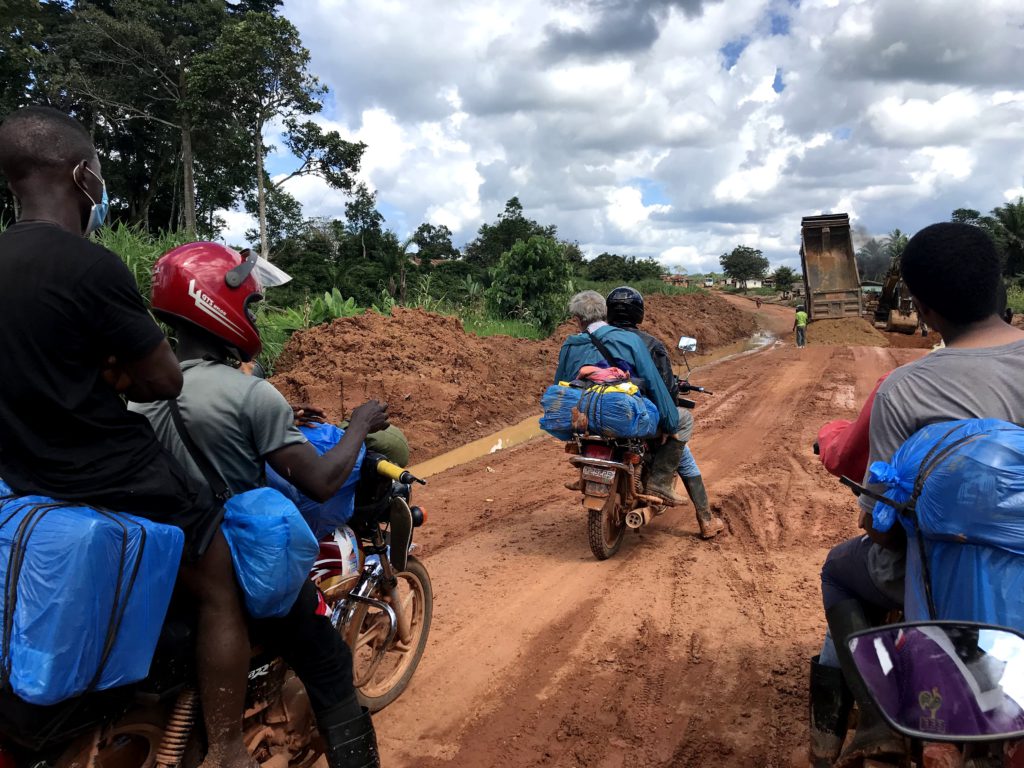 It was impressive to see the trucks stuck in the mud for weeks, and the children, who looked no more than 12 years old, working on the road, pushing motorcycles through the mud to earn only 5 cents. The police and army checkpoints were constant, practically every 30 km. Thanks to the fact that we were accompanied by Father Ricardo, they didn't bother us too much.

St. Francis Catholic School, of the Salesian mission in Tapeta, has a health and maternity center, primary and secondary school, water pump, parish, and priests' residence. For this installation we were helped by the local electrician who does the work, one of the drivers and a student, Rita, who was finishing high school and who they also wanted to send to 8st to study electricity and solar.

We completed this installation in a record time of 3 days. Here the weather was even more unpredictable, and the rain was constantly pounding us on the roof. The installation was even smaller than the rest, 18 panels, 1 inverter, 1 lithium battery.

One of the nights before finishing the installation, we were having dinner, listening to the genset running, and we heard (HALELUYA) which meant that a woman had just given birth.

After the installation, we tried to explain and train as best we could the local electrician, the student Rita, and our driver who had to bring us back. What a route we had left, and this time, without Father Ricardo.

The controls were getting more and more interesting. They kept asking for our passports. Mine passed quickly with a comment of Barça or Madrid and I followed the roll, although of course, I am of Athletic Bilbao. With Abdul's passport, on the other hand, they would stop for a while, looking at each page in great detail.

On the way back to Monrovia, we had some mechanical failures that we solved with small pit stops in villages, but already in the van, we all fell asleep, including the tireless Mapolo. 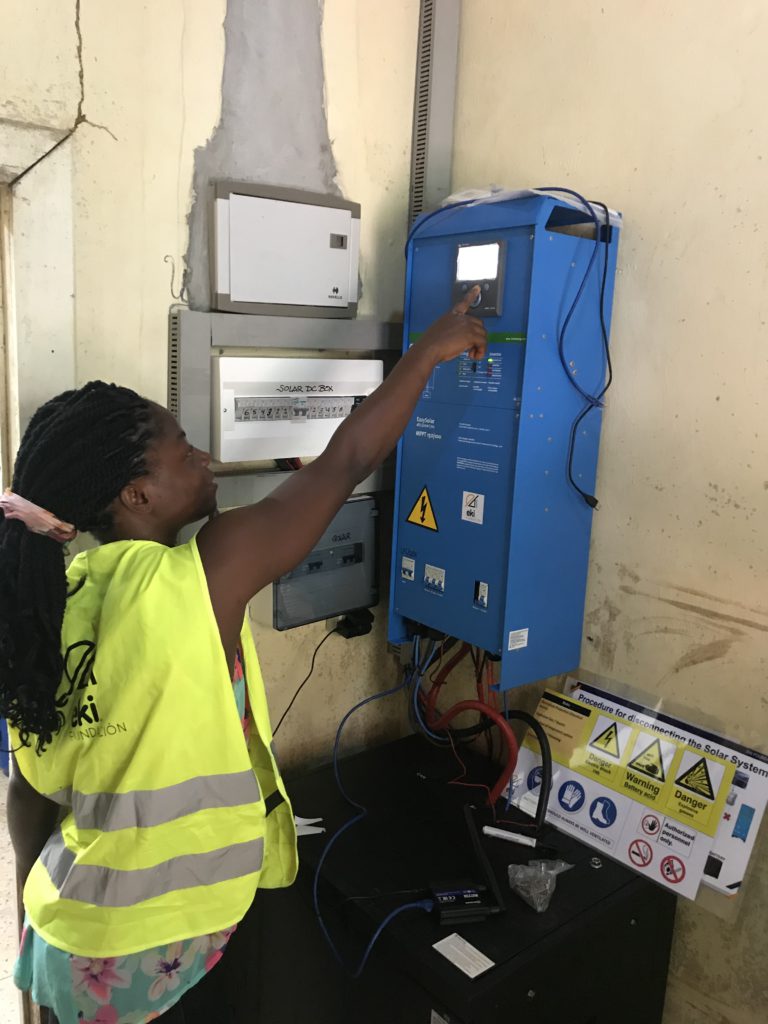 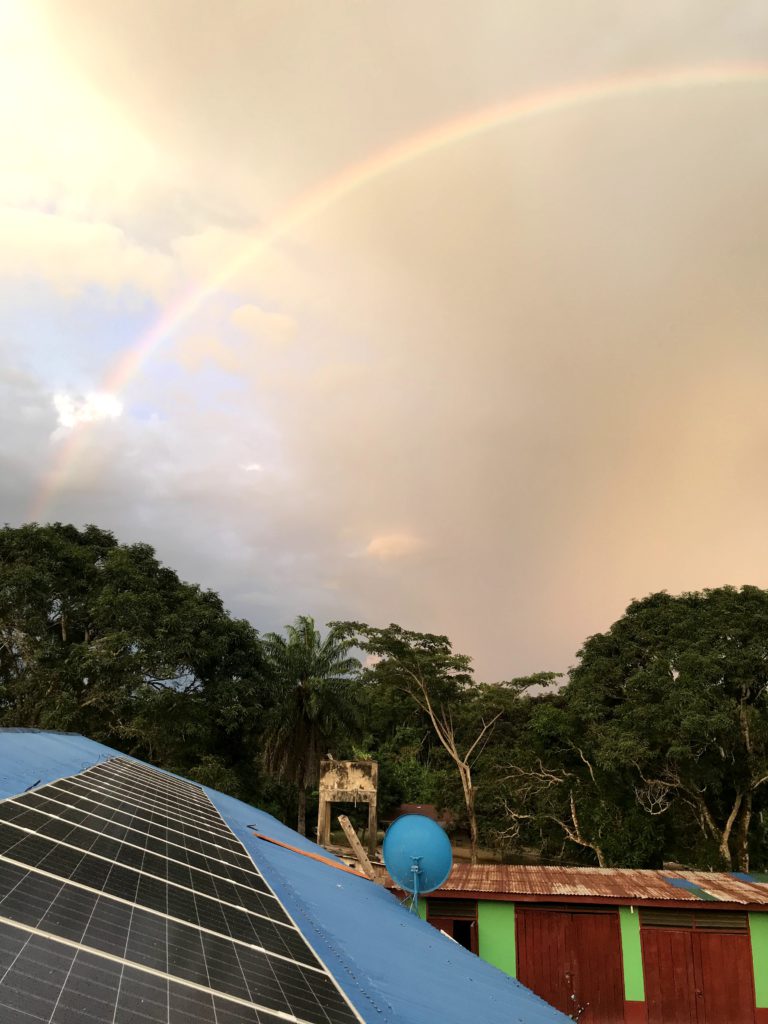 During the last three days, we focused on the final details of the installation of 8st and Matadi, as well as training the students. I also found time to get away with Abdul to surf.

On one of the surf breaks, I met Melvin, who was working as a lifeguard in a restaurant on the beach and was also the Liberian representative of the NGO Waves for Change originally from South Africa. The program of this NGO is to take in children from difficult situations and offer them a 12 month program where they take them several times a week to surf and in this way help them physically and mentally in their daily situations unimaginable for us.

It was time to go home. I said goodbye to Liberia, the whole team and my last new friend, Melvin, to whom I gave the boards I had brought and promised him that I would be back soon to do more projects as well as surfing. 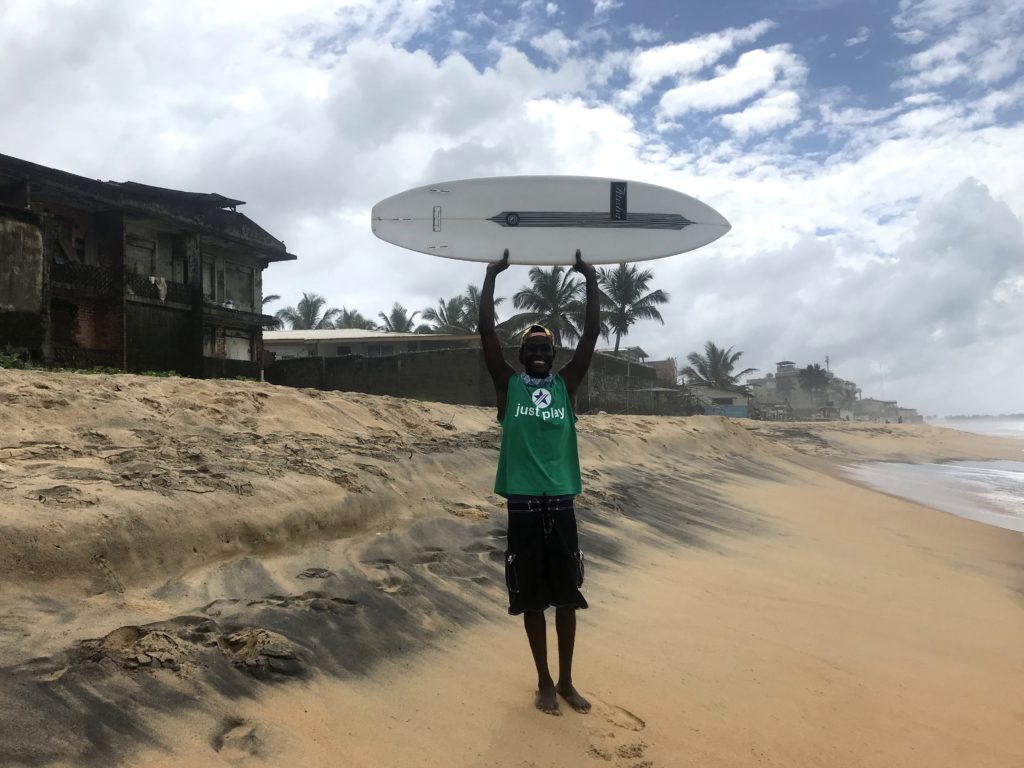